I’m surprised to be writing this review of the GF100-200mmF5.6 R LM OIS WR lens because I had no intention of buying this lens. Given that this lens covers most of the field of view as the super popular 35MM format 70-200 lenses, albeit with less reach at the far end at 158MM, it should have been a must have for every GFX owner. However, with the slight lack of reach, and the dark F5.6 aperture, the reception to this lens has been somewhat lukewarm.

This review is from the perspective of a hobby photographer that uses the camera mostly for capturing memories while travelling. I’ve tried to provide a wide variety of image examples while using this lens. I’m of the belief that any modern camera with a good set of lenses, in the hands of a professional, can create incredible images. I believe this is especially true when you add in lighting to give smaller sensor cameras a boost in capturing all the photons the strobes put out.

Fast forward to my recent trip to Japan and I found myself at Osaka Castle with the GF110MM, GF63MM and GF45MM in the bag. My friend who had setup his tripod next to me had his Sony A73R (an excellent camera that evokes absolutely zero emotional connection with me) and the very good 70-200 F4 G lens. I soon realized that my 110MM would not provide sufficient reach and the wind was causing slight blur even with the camera mounted on a sturdy carbon fibre tripod. You know where this is going.

In Japan, there are a number of incredible camera stores that have survived the onslaught of online shopping. BIC Camera and Yodobashi are two that come to mind. I’ve always wanted to buy something big at one of those two legendary stores, but I usually just ended up buying more Extended Photographic Material (EPM) Camera Straps. With the yearning for more reach, I now had my opportunity to buy something, but would they have any in stock, given it was such a new lens?

Fujinon lenses often come up on sale, it always pays to wait a bit for the sales to come and then grab one before they inevitably sell out.

We headed over to BIC Camera in the Namba area of Osaka and spoke to a very knowledgeable salesperson in the Fujifilm area. He not only knew his Fujifilm cameras, he was very friendly and encouraged me to try the lens on display with my camera. There was no pressure; just use the lens and try it out. When I decided to go for it, he noted that they only had one in stock in all of Osaka and it happened to be at this store, so I lucked out.

I paid full retail for the lens, which at the time worked out to US$2,000. Fujinon lenses often come up on sale, so if you’re not in a rush, it always pays to wait a bit for the sales to come and then grab one before they inevitability sell out. At the time of writing this post, Fujinon has an amazing sale going on where the lens is being sold for 25% off!

We quickly made our way to the hotel to ditch the massive box and headed back to Osaka Castle to catch the sunset from the same spot as before, but now with my new lens. Something I noticed right away was that it’s much lighter than expected. It also appears to be longer than necessary because there’s a 30MM empty space at the sensor end of the lens, to accommodate the 1.4X Fujinon teleconverter. I question how many people will use this with the teleconverter given that it’ll lose one stop of light gathering, making it an F8 lens.

The GF100-200 is massive. Fujinon seems to recognize this fact by including a tripod mount for the lens.

The GF100-200 is massive. Fujinon seems to recognize this fact by including a tripod mount for the lens, which helps it remain stable and balanced on a tripod. The tripod mount is also likely there for those who use this lens with the teleconverter which adds another 400g of weight and 27MM of length. As mentioned before, while the lens is huge, it’s surprisingly light. It’s light enough that you can carry it around by hanging it off your shoulder and supporting the lens with a light touch to keep it from banging into things (due to its size).

The overall build quality is excellent, with the usual Fujinon external aperture ring, zoom ring and focus ring. Everything feels good, including the switch for the focus distance and the image stabilization modes. However, I do wish the zoom ring was a bit harder to turn as I have to make a conscious effort to not turn it accidentally while bracing the lens during hand-held shots. I think they could have made the ring a bit shorter and left some space to place the hand during hand-held shots. This is only an issue when I remove the tripod mount; when it’s still attached, I use the tripod mount to brace the lens and the issue is resolved.

Lens hoods are a problem for Fujinon and it appears they’ll never get around to making them better. Whether it’s the X series lenses or the G series lenses, the lens hoods are universally flimsy or ill-fitting. The GF110MM lens hood flexes which does not inspire confidence. The GF100-200MM lens hood is better (and includes a window for adjusting polarizing filters), but is nowhere near as sturdy as the hoods used on the Sony G and GM lenses. I hope Fujinon puts effort into improving future hoods; I’m waiting for JJC to release replacement hoods, which are always of better quality than the Fujinon ones and cost next to nothing.

Fujifilm and their lens division Fujinon, are known for their consistent high quality lenses and camera combinations. You really can’t go wrong buying a Fujinon lens and marrying it to their excellent cameras, to produce stunning images. I expected no less from the GF100-200 and for the most part, the lens has lived up to the company’s well-earned reputation. Contrast is great, resolution is high, corners are sharp and consistent, and everything appears as it should. While the lens is very good, it does not have the wow factor of the GF110 or GF45, which knocked me off my feet the first time I viewed them on a 5k screen.

While the lens is very good, it does not have the wow factor of the GF110 or GF45, which knocked me off my feet the first time I viewed them on a 5k screen. There have to be compromises as compared to prime lenses.

Having said that, the equally expensive Sony 70-200 F4 G has issues in the corners and some consistency issues (at least from the copies I’ve experienced) so I think it’s the nature of the beast when it comes to zoom lenses covering several focal lengths. There have to be compromises as compared to prime lenses. One issue that I was not expecting however is the level of distortion in this lens, even when stopped down.

I’ve included an example below with distortion correction at 100% and at 0% using Capture One. With 50MP of data, it really isn’t going to make a difference, but I was expecting little to no distortion on a F5.6 lens at these focal lengths. I guess this is the price we had to pay for the relatively low price and low weight of this lens given the medium format sensor coverage area, and high resolving requirements of the future 100MP GFX sensors.

The elephant in the room

When I’m looking at buying a lens, there’s nothing sexy about F5.6. Nothing. However, with this lens, aperture sexiness doesn’t impact the usability because of the very effective image stabilization. Just like the Fujinon XF55-200, a remarkable lens in its own right, the GF100-200 has astonishingly good optical image stabilization (OIS).

Below, I’ve provided examples taken in very dark conditions in an unlit apartment of my dog, hand-held at 1/10 of a second at 200MM! The images are tack sharp and I was able to consistently achieve these results (as long as my dog didn’t move). With the OIS turned off, I needed 1/300th or faster to get sharp images, which matches Fujinon’s 5-stop stabilization claims.

The GF100-200 has astonishingly good optical image stabilization (OIS). Hand-held at 1/10 of a second at 200MM! The images are tack sharp.

The second aspect to aperture is the depth of field and the ability to isolate subjects. While F5.6 is not going to create the ethereal images that the GF110 does at F2, it does still provide for good subject separation, given the focal length and the medium format sensor. To give a comparison, with the lens set at 200MM, F5.6 and the subject 1m away, this lens has 9cm of depth of field; to get the same subject separation on the X series camera would require a 100MM lens and F2.5 aperture, and for 35MM “full-frame”, you’d need a 158MM lens and an F4.5 aperture. There are lots of examples online of people using their 70-200 F4 35MM format lenses for portraits.

Since this lens uses a linear motor (the LM in the lens name) focusing system, it focuses very quickly and quietly, and is likely limited in speed by the camera’s sensor and processor speed, rather than the lens. When the GFX100 comes out with a modern focusing system, the G lenses with linear motors should demonstrate even faster focusing. Something I love about this lens is that Fujinon found a way to lock the floating focus group when power is not applied; this prevents the “thud” that is commonly experienced in linear motor Fujinon lenses when they’re powered off.

Focusing is very accurate, as you’d expect in a mirrorless camera, and with greater depth of field than the GF110, it’s much easier to get a person’s face in focus, rather than just one eye or eyelash as is often the case with the GF110 at F2. This inability to go wider with aperture is actually a good reminder of how to take images of people with their eyes, nose and ears in focus.

Now that I’ve used the lens for a month, with it glued to the camera across four cities (Osaka, Kyoto, Beijing and Hong Kong), I feel confident in recommending this lens for travel photographers and for those that want to use it as a portrait lens. It’s yet another stellar lens from Fujinon that will find its way into many, many camera bags.

If you’ve enjoyed the above, please leave a note below; I’d also recommend heading over to a few other sites that I feel provide excellent and in-depth reviews of this lens:

If you’ve found the above information useful, and are thinking of purchasing any of the gear mentioned, please consider using the links provided. As an Amazon Associate I earn from qualifying purchases. 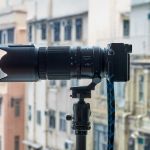