This review is for the Haoge square metal lens hood that’s made for the Fujinon GF45 F2.8 and GF63 F2.8 lenses. I sat on this review for more than nine months because the original hood I purchased here in China had very poor fit. The first one I received was so difficult to put on that I didn’t want to damage my lenses by trying. I sent that hood back and received an updated version which now fits correctly.

I understand the manufacturer had a few versions (some were too tight and others too loose and would rattle). Based on my current experience in 2021, it’s my belief that Haoge has sorted out the fitment issues and I now feel comfortable to share this review with my readers. Haoge makes very high quality accessories for cameras; their products are so good that I wonder if they’re the OEM or somehow related to the OEM of these products.

To be fair to Haoge on the fitment issue I mentioned above, my expensive Fujifilm metal hood for the XF16 F1.4 rattles so bad that I had to add some gaffers tape to the threads to make it more solid. I have several hoods from Haoge for the XF23 F2, XF56 F1.2 and now the GF45 F2.8. In general, their quality has been excellent, with only this one hood being problematic. Haoge was great in immediately taking it back, making updates, and then sending out a new version.

Since some wonder if I’m paid to write these articles, I’ll add a disclaimer here that the lens hood and any other items mentioned in this article were purchased at full retail price, and no discounts or compensation were provided to write this article. Furthermore, nobody reviews these articles before they’re posted; they’re my opinion and mine only.

Fujifilm lenses were known for having pretty poorly constructed hoods, but they made significant improvements when they launched the GF line of lenses. They added locking tabs so the hood can’t accidentally slip off, and they appear to be made from a thicker plastic to prevent them from being flimsy. On the XF series lenses, it’s mandatory to change some of the original hoods because they’re so bad. However, for the GF lenses, you’d only want to change them out because of cosmetics.

If it’s all about cosmetics, we then want to ensure two conditions are met for a lens hood:

For item #1, since it’s subjective, I’ll leave it up to you to decide on how it looks, but I think it looks great on the GF45 (the lens used in the product shots). However, I don’t like the hood on the GF63 because that lens has an external focus motor. I find it weird when the metal hood moves in and out. For that very reason, I don’t use any hood on the GF63.

For item #2, I’ve tested the hood on both the GF45 and GF63 and don’t see any impact on bokeh around the edges focused near or far; there’s no cutting off of the bokeh balls. I also have not seen any impact on vignetting or any other untoward behaviour as a result of using the hood.

While the hood looks cool and doesn’t negatively impact the lens’ performance, there are two downsides you may want to consider before ordering one:

Taking into consideration all of the above, I feel comfortable to recommend this hood for people that are looking for a retro appearance or if they want a very robust metal lens hood. If this hood isn’t for you, you can also consider using the hood from the GF63 on the GF45, which helps reduce the overall size of the rather large original GF45 hood.

I hope you’ve found the above useful. If you decide to buy this hood, please consider using this link. This website may earn a commission from qualifying purchases. 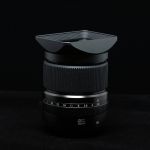