Home of the Taj Mahal

At 11am, right after breakfast, we headed over by car to Agra, the home of the famous Taj Mahal.

I read several blogs that said the Taj Mahal was not as impressive in real life as they expected. The Taj Mahal seemed to be everywhere in the 1980’s and 1990’s thanks to its overuse in restaurant names, Donald Trump’s ill fated casino, and a multitude of poorly executed replicas. I wasn’t sure what to expect.

We arrived in Agra four hours after our departure from Delhi. The initial impressions of Agra were pretty negative; the city itself is nothing glamorous and certainly does not allude to the majestic structure that it’s famous for. The city looked pretty rundown and extremely busy with cars, tuktuks, cows, bicycles, people and everything else that evolution has created!

And then it happened. The Taj Mahal came into view. It’s hard to describe the feeling of seeing something in real life that you’ve only seen for decades in pictures. It’s so familiar, but somehow totally foreign, an odd feeling indeed. Our driver, completely oblivious to the hundreds of moving vehicles, animals and people surrounding us, stopped in the middle of the road and asked if we wanted to take pictures. With horns honking and cars stacked up behind us, we decided it best that we kept moving along.

Our hotel was a simple affair with close proximity to the Taj Mahal. Our goals were to see a sunset and a sunrise at the Taj Mahal. I had read on several blogs that the view from across the river is fantastic for sunset. With sunset looming, we headed over to the Mehtab Bagh park across the Yamuna River. The surroundings were beautiful and the view magical. The security does check your bags and no tripods are allowed. 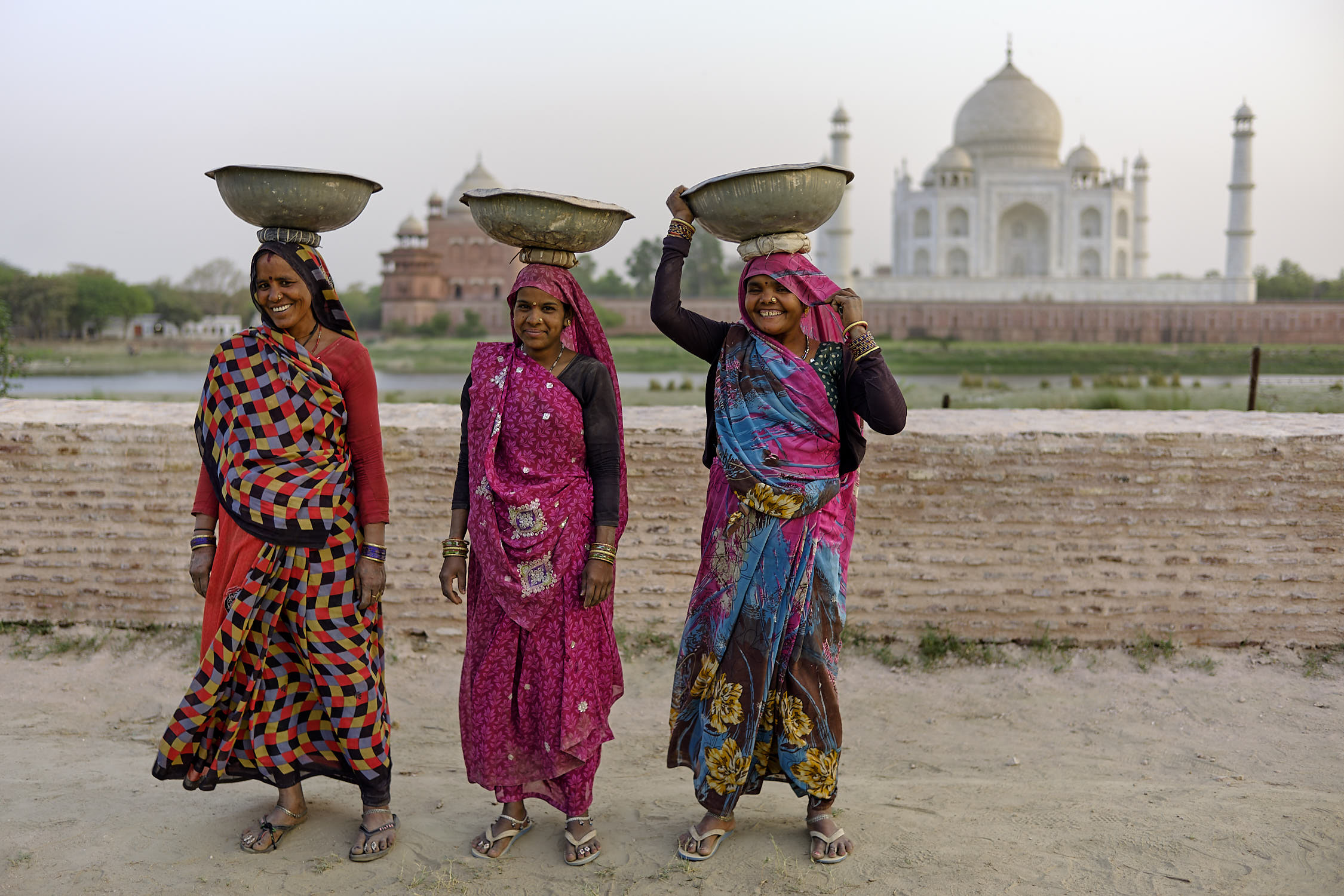 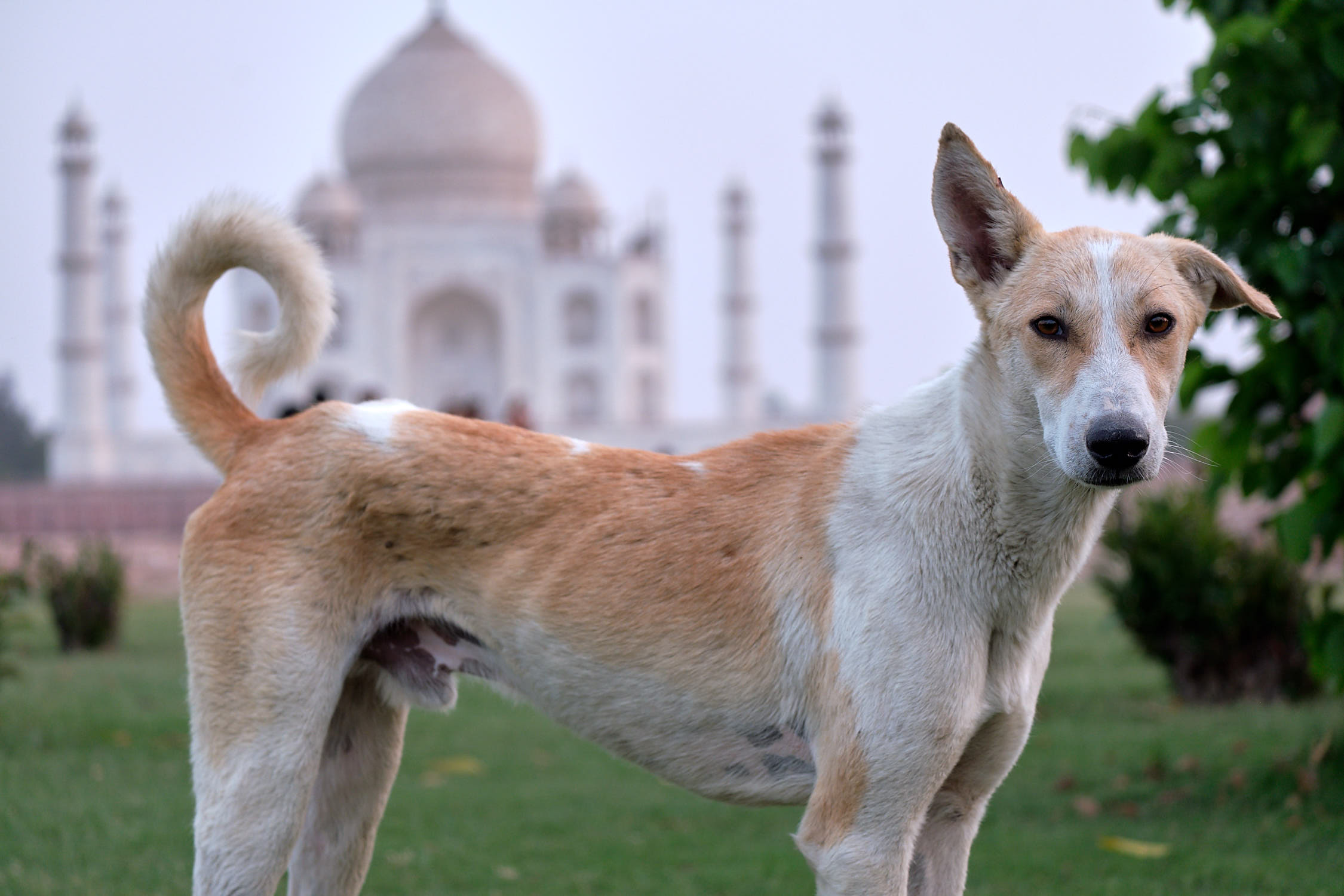 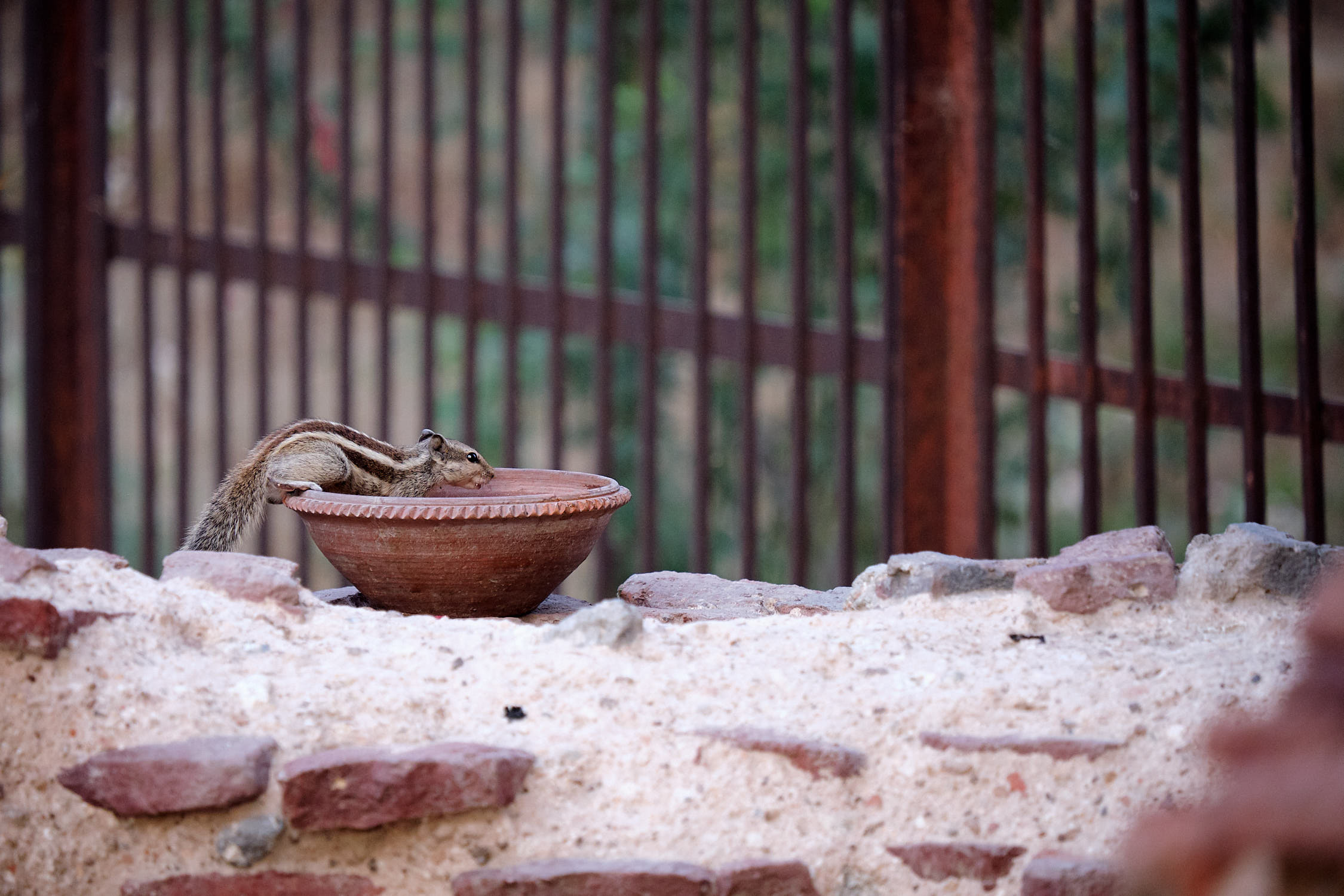 It was unfortunately a hazy evening so there wasn’t a “golden hour” for us to capitalize on, but it did give us more time to enjoy the scenery and not worry about taking that perfect shot. We were awestruck watching the sun set at the Taj Mahal. The audience was mostly Indian tourists so expect lots of attention if you’re a foreign person.

As soon as the sun set, the security personnel quickly asked everyone to leave the park. A fun hint, if you stay until the very end, there’s a good chance you can get an image of the Taj Mahal with no people in it, and maybe, if you’re really lucky, a few goats in the foreground.

We were pretty exhausted so we went for dinner at a nearby hotel. Our tuktuk driver tried really hard to take us to his preferred hotel, but we were firm and provided GPS directions on where we wanted to go. The hotel we had dinner at turned out to be amazing, the Oberoi Agra. We had Indian food in their casual restaurant since we didn’t have pants to eat in their main fine-dining Indian restaurant. The food was excellent and the prices reasonable.

For the next morning, we pre-purchased tickets to the Taj Mahal from a very flaky government ticketing website (lost US$50 on the first attempt at buying tickets). Our goal was to arrive at 5:30am and get in for the sunrise. We had booked a car to pick us up at 5am, however unfortunately the driver didn’t show up and we had to scramble to find an alternative. Fortunately, there were many tuktuks around Agra at that time and we quickly hopped on one and arrived at the Taj Mahal at 5:40am.

We went to the west gate and were dropped off a few hundred meters from the entrance. Motorized vehicles are not allowed within the permitter of the building to protect it from pollution. Upon arrival, we were quickly asked for our tickets, told to go to a small building to pick up our water bottle and shoe covers.

We ended up being the second group in the foreigner line. As the minutes rolled by, it got busier and busier with hundreds of foreigners and Indians lined up neatly in their respective lines, separated by metal barriers. The sunrise was scheduled for 6:24am, but they started to let us in around 6:15am. People RAN the moment the gate opened to try and get the magical shot of the Taj Mahal with no people in it. This is what it looks like at 6:15am with the sun just below the horizon, a warm glow and few people. 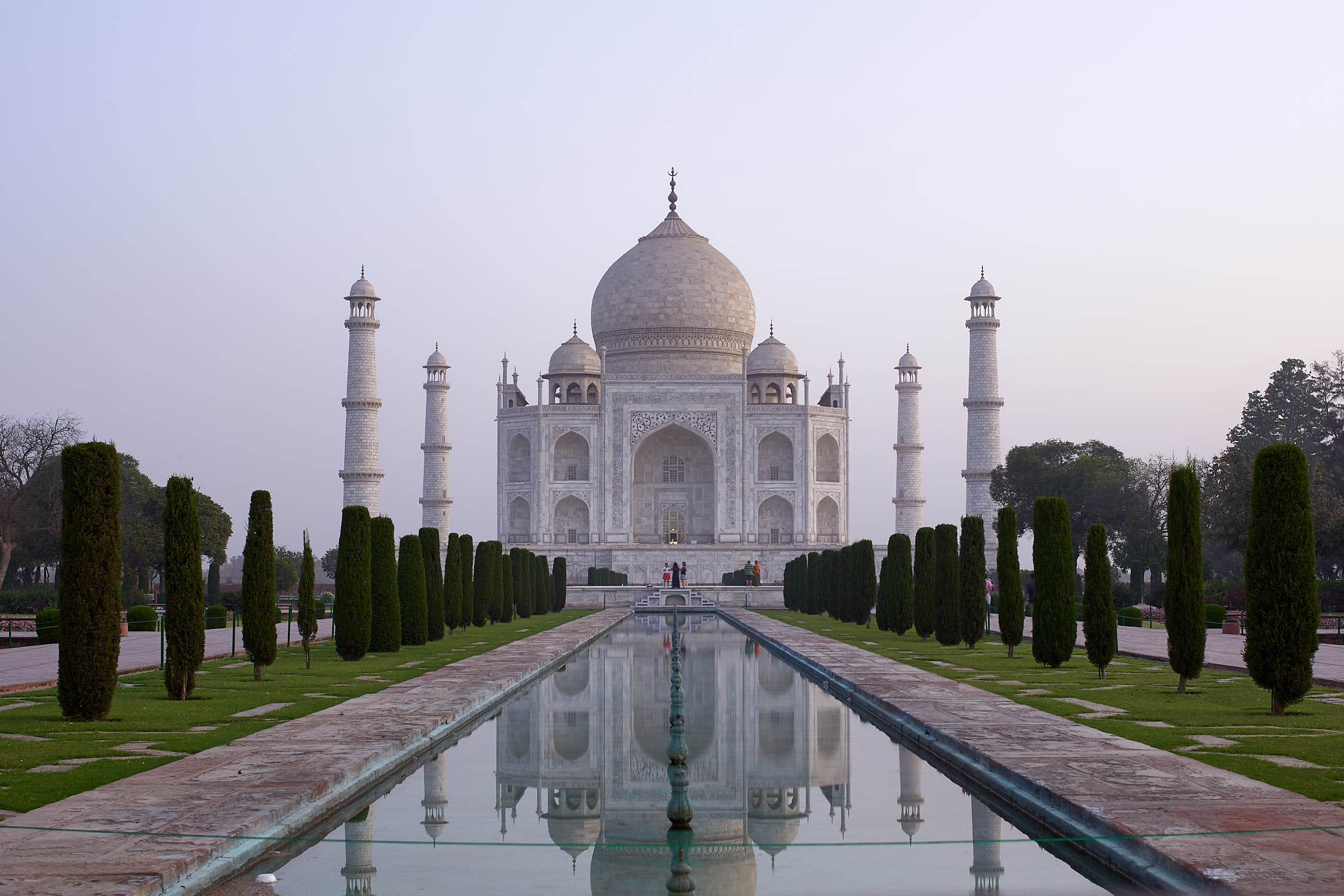 A tip for photographing the Taj Mahal that I realized AFTER when editing the pictures. I should have framed the image lower to capture the full reflection in the pond, and it’s also very important to line up the little pond structures perfectly straight. A number of my images were a loss because I didn’t align it dead centre. You should also know that tripods are not allowed and they do check most bags (both of our bags were not checked, but our friends’ were).

People were very considerate in giving each other turns at the perfect spot to take the picture. Everyone was there for the same reason, so everyone made sure that we all walked away with the image we so desired. Just a few minutes later, as people started to stream in, the sun started to peak through and added more energy to the scene. 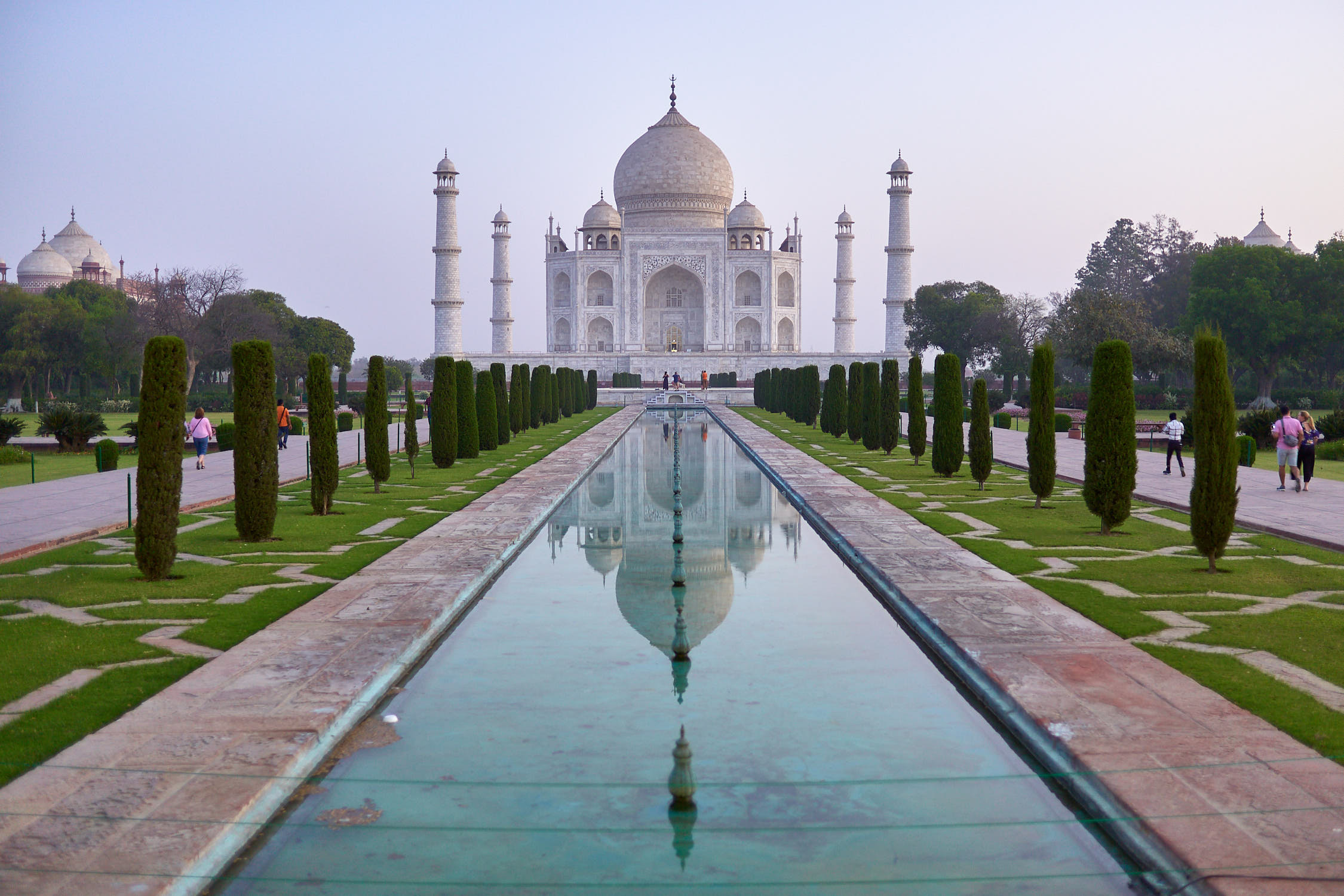 Once we got that image, things went into a bit of a whirlwind! We had a young guide offer up his services for a price that seemed reasonable. We didn’t agree to pay him at first until he proved he knew what we was doing. Oh boy did he know what he was doing; we frantically ran from corner to corner of the complex to capture all these angles and views that he (and I assume all the guides) has identified. It was incredible to have the Taj Mahal pretty much all to ourselves for those few minutes at the beginning. 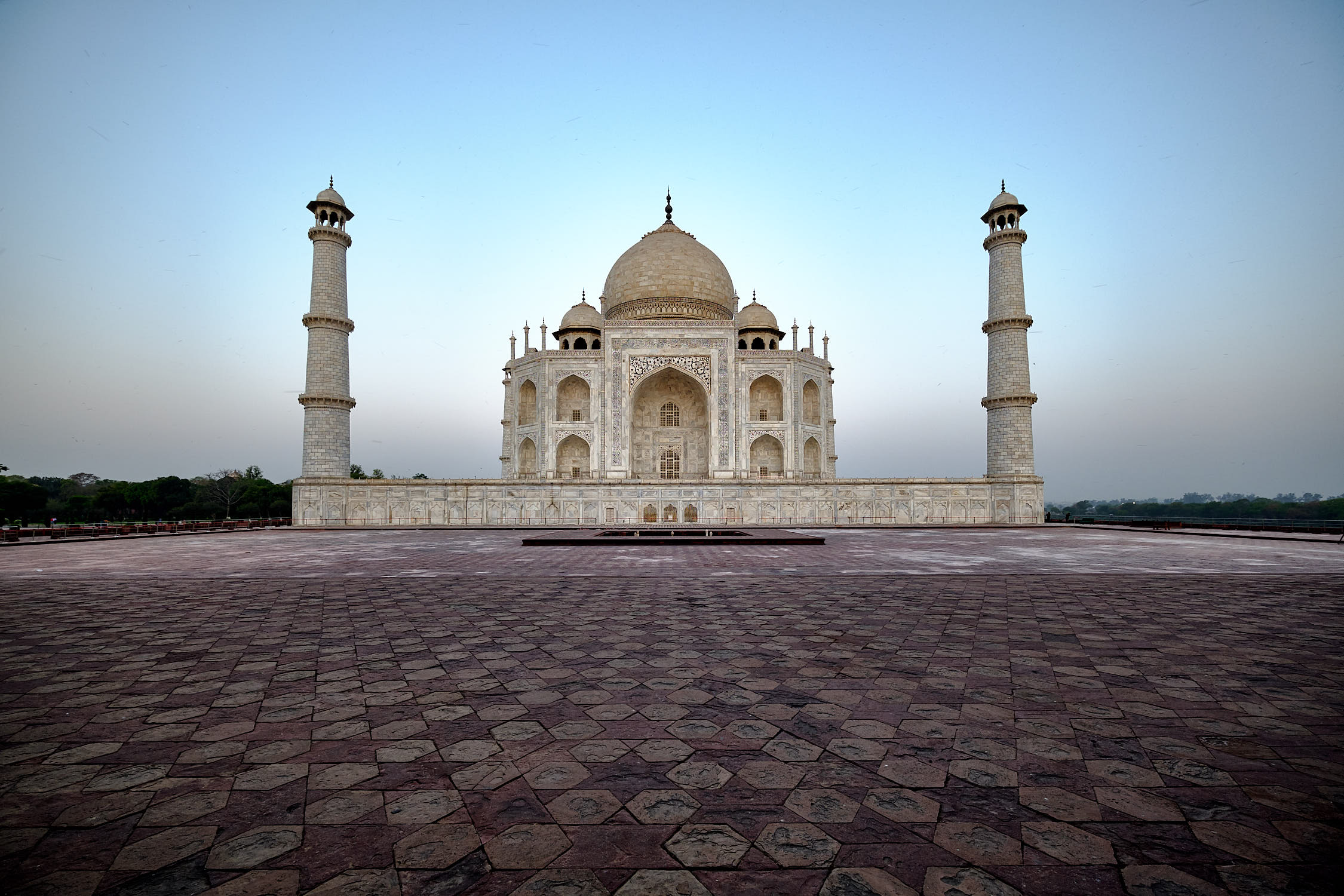 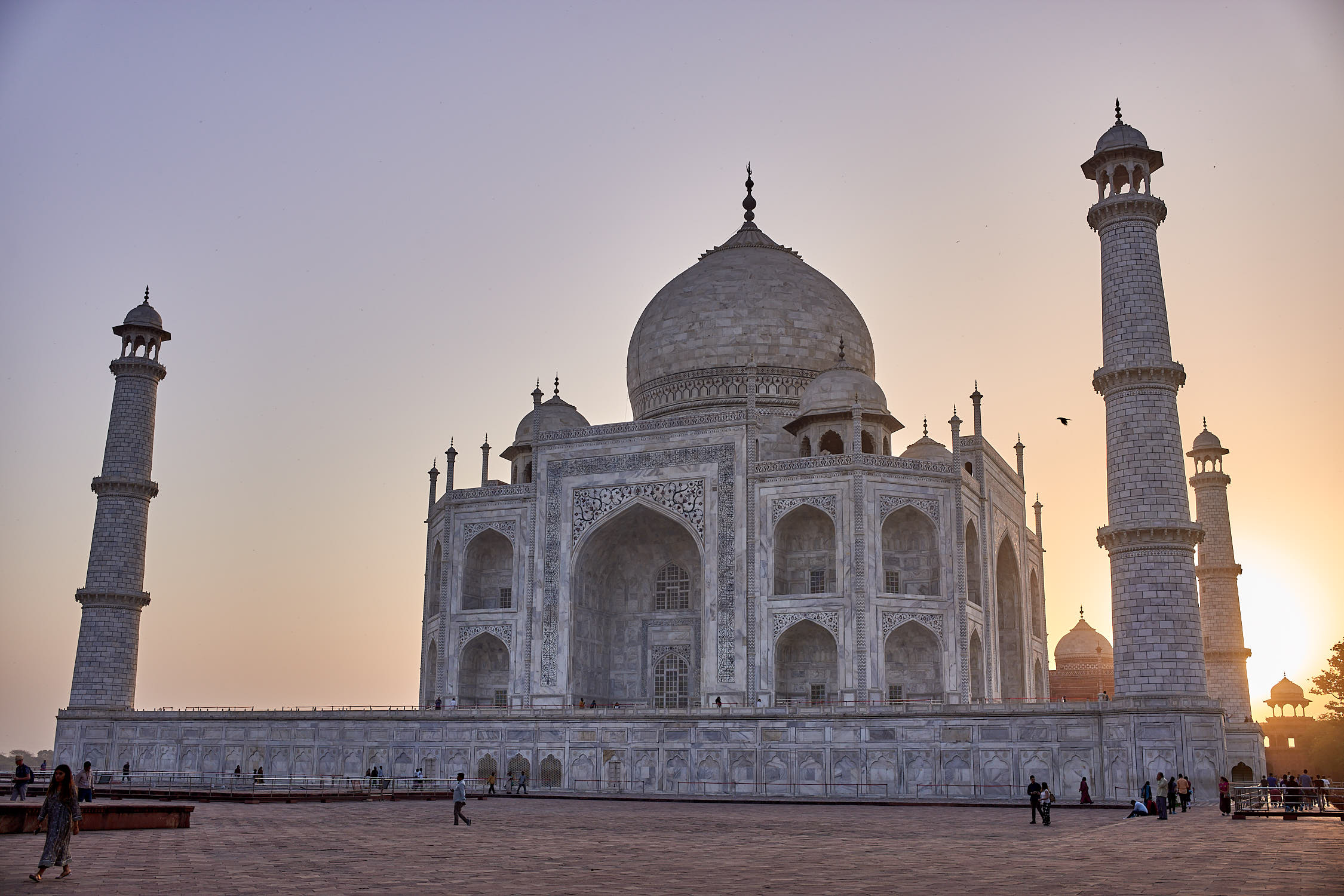 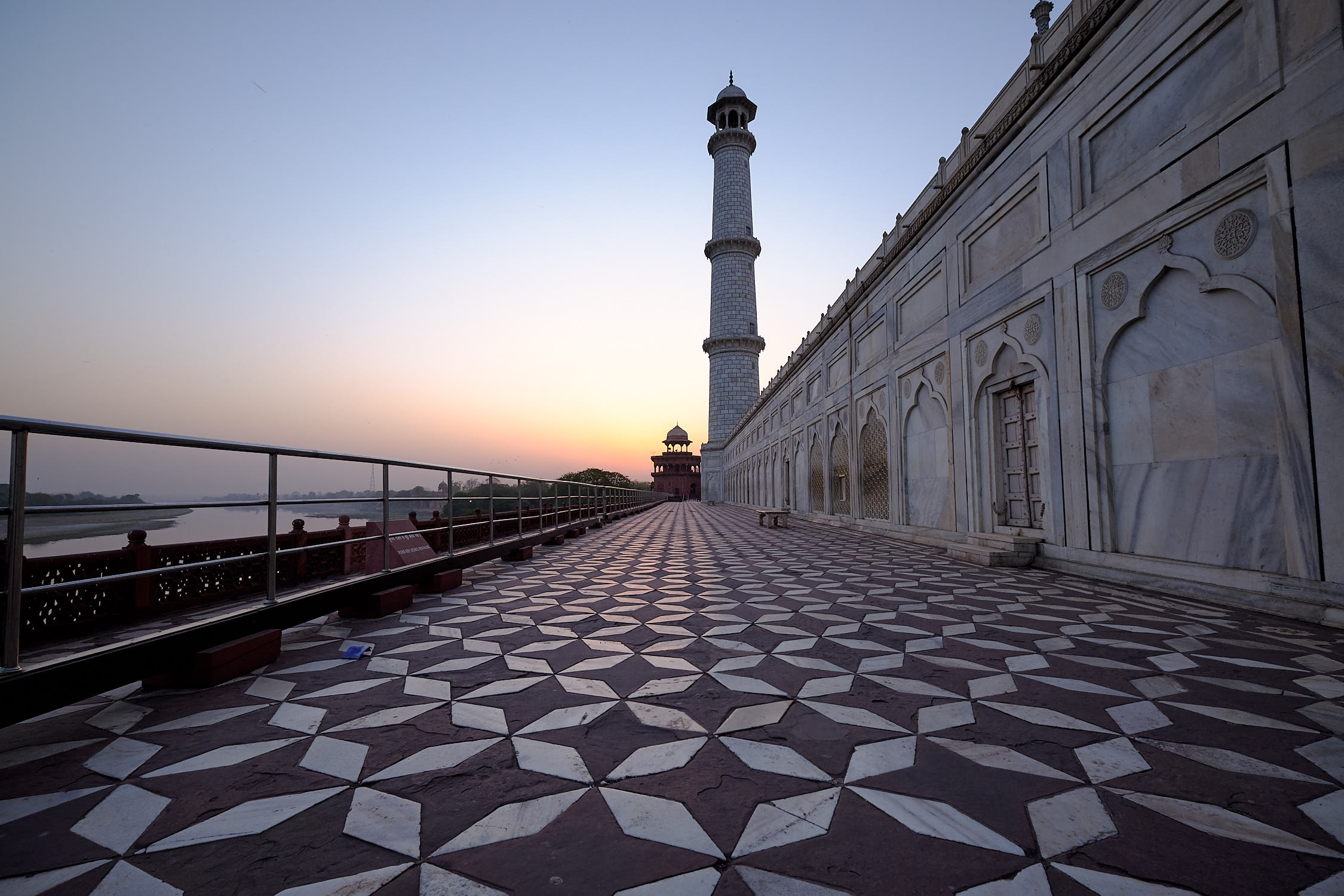 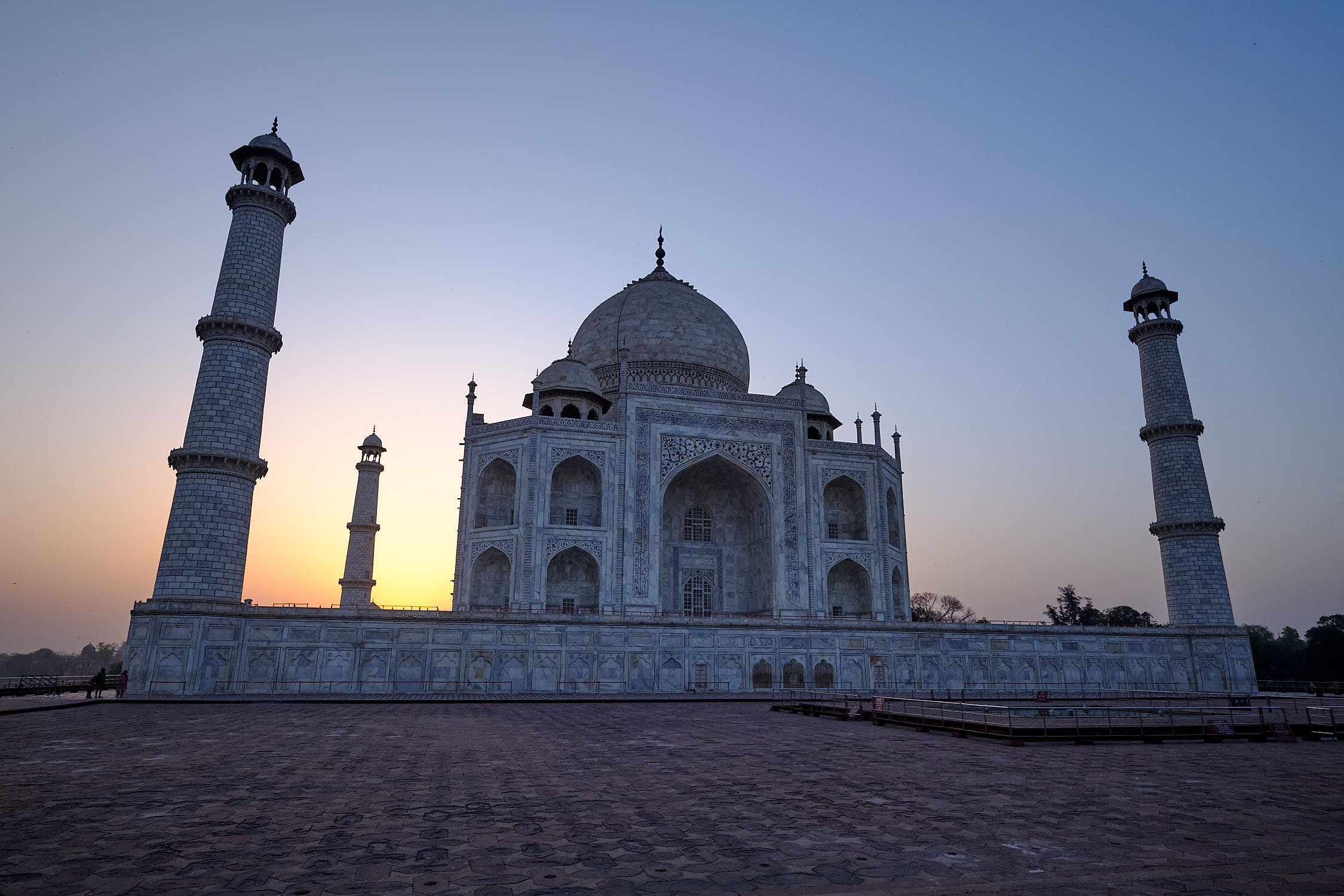 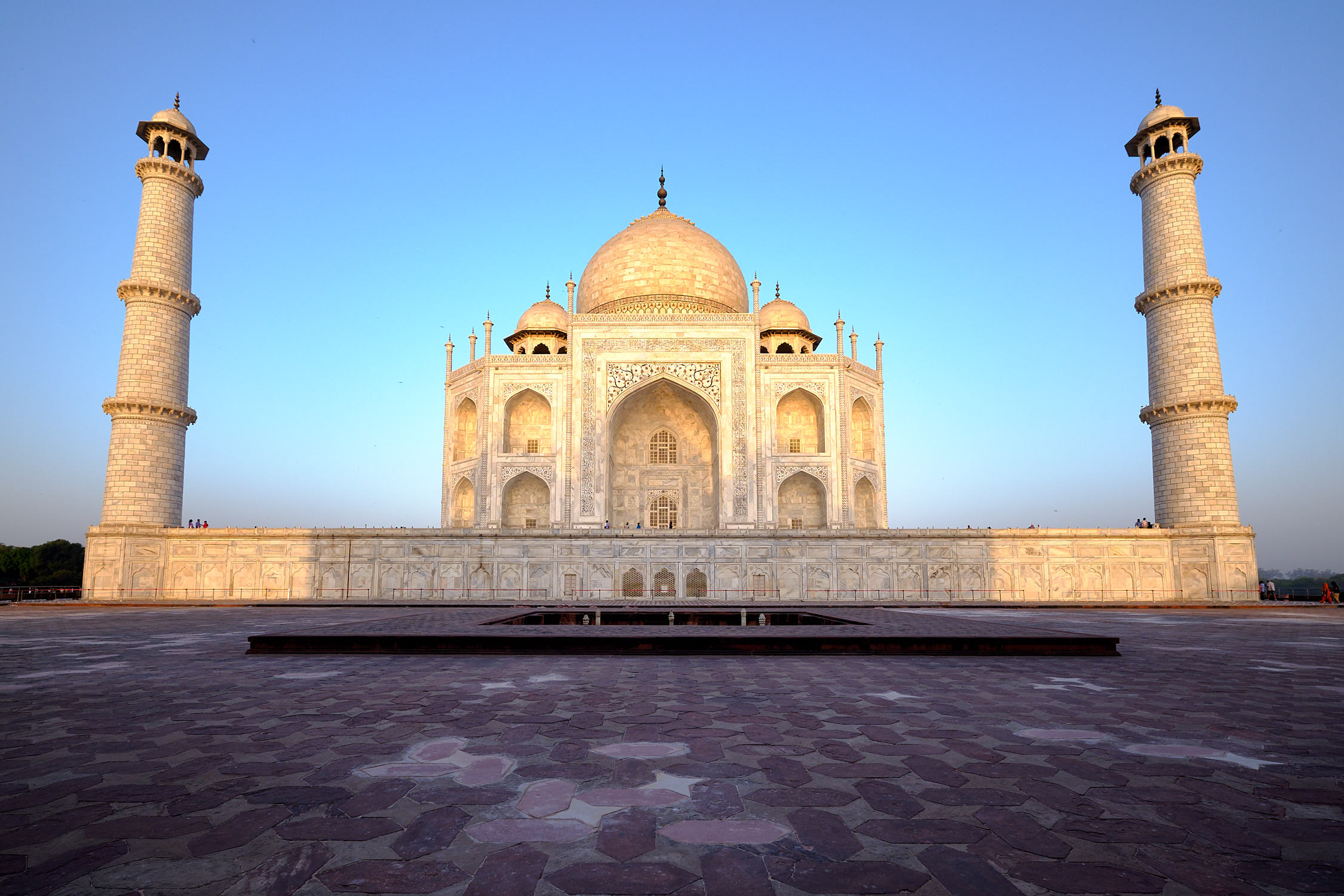 After the first hour of running around, we slowed down and took in the amazing atmosphere that we were witnessing. As time went buy, the complex started to really fill up with people. At 8:30am, the place was packed full of people. You could barely stand in the popular sections to take images. Surprisingly, the benches were often available, so we sat down and soaked it all in. There is something very, very special about watching the sun change the colours of the Taj Mahal first thing in the morning while relaxing at a bench. 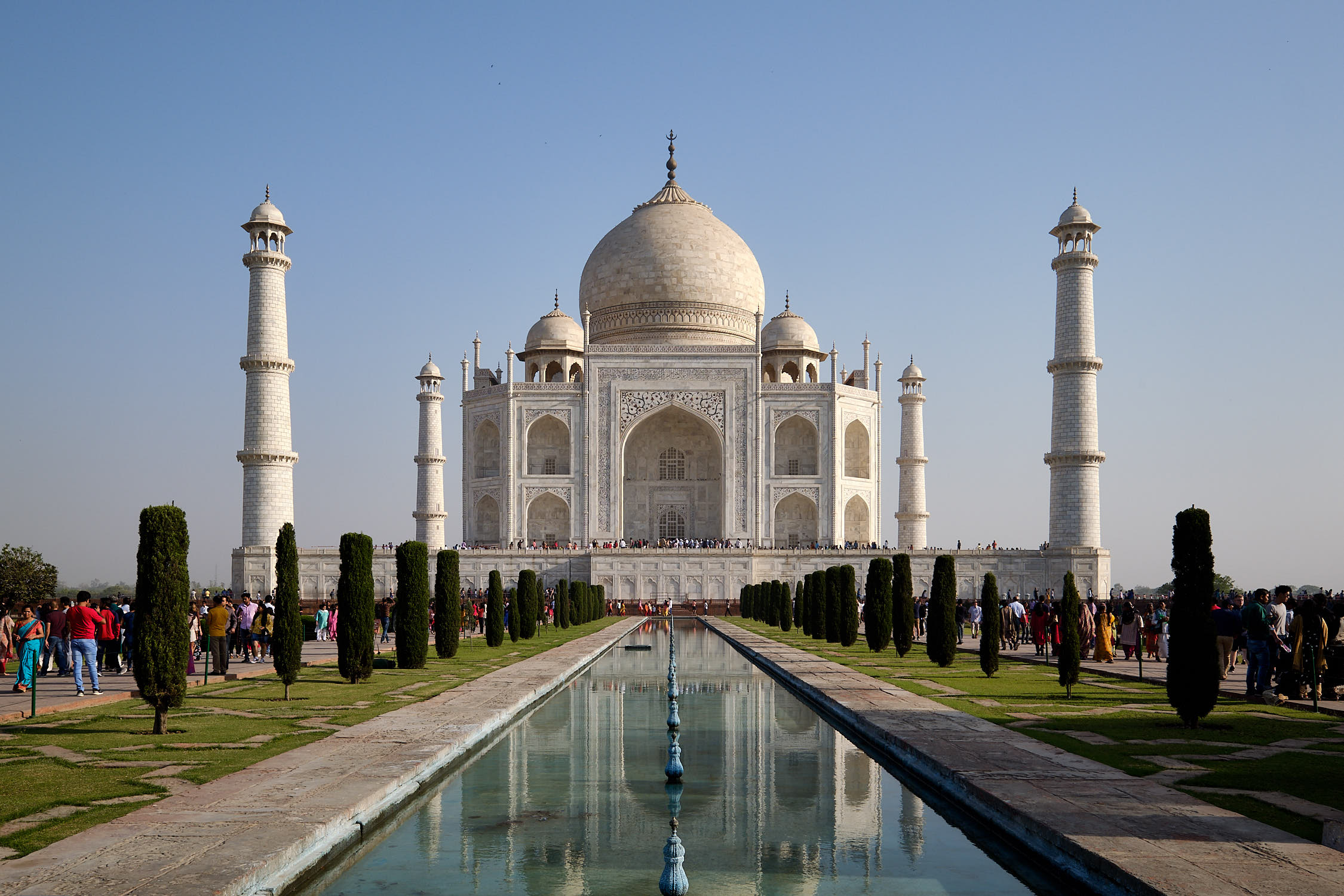 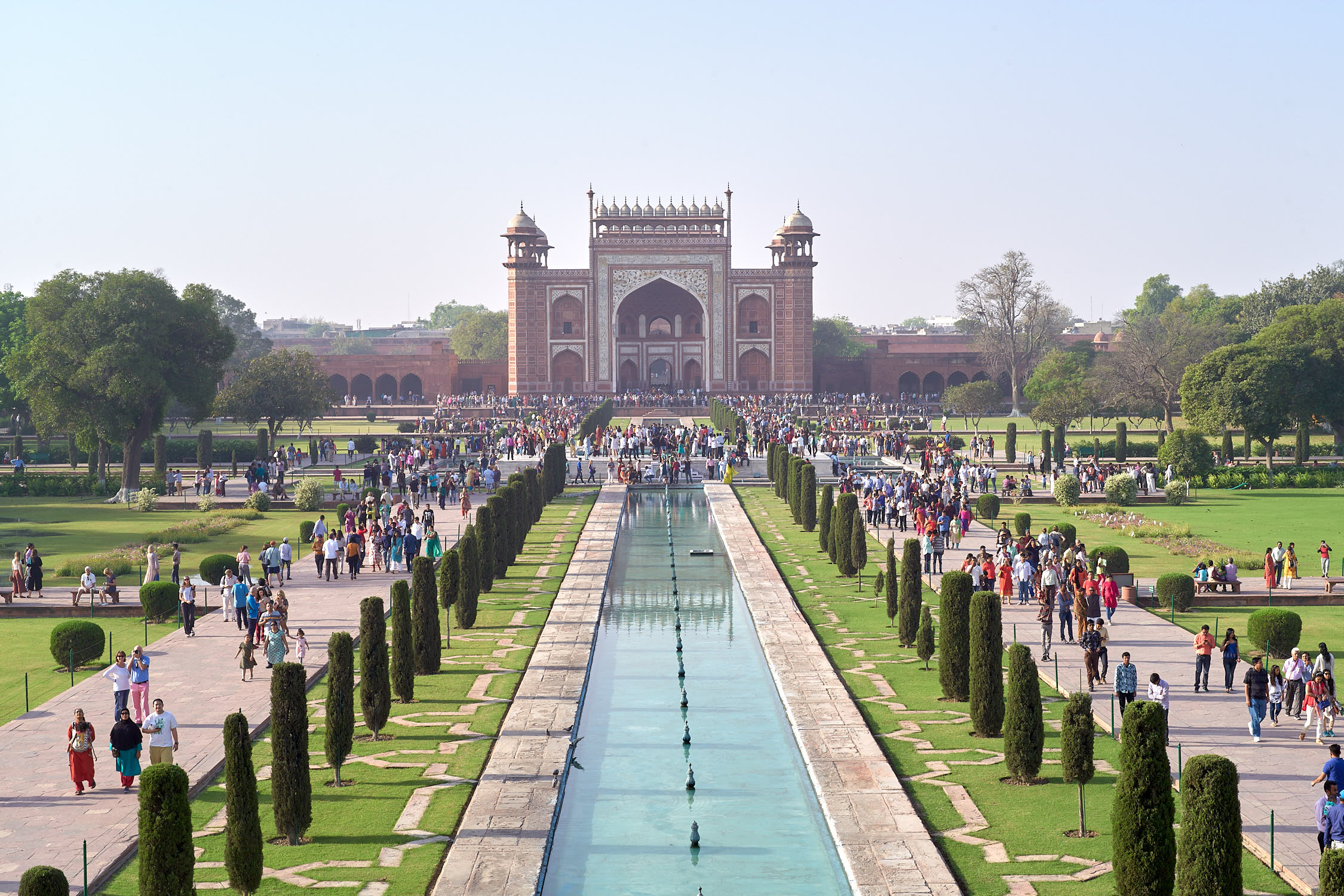 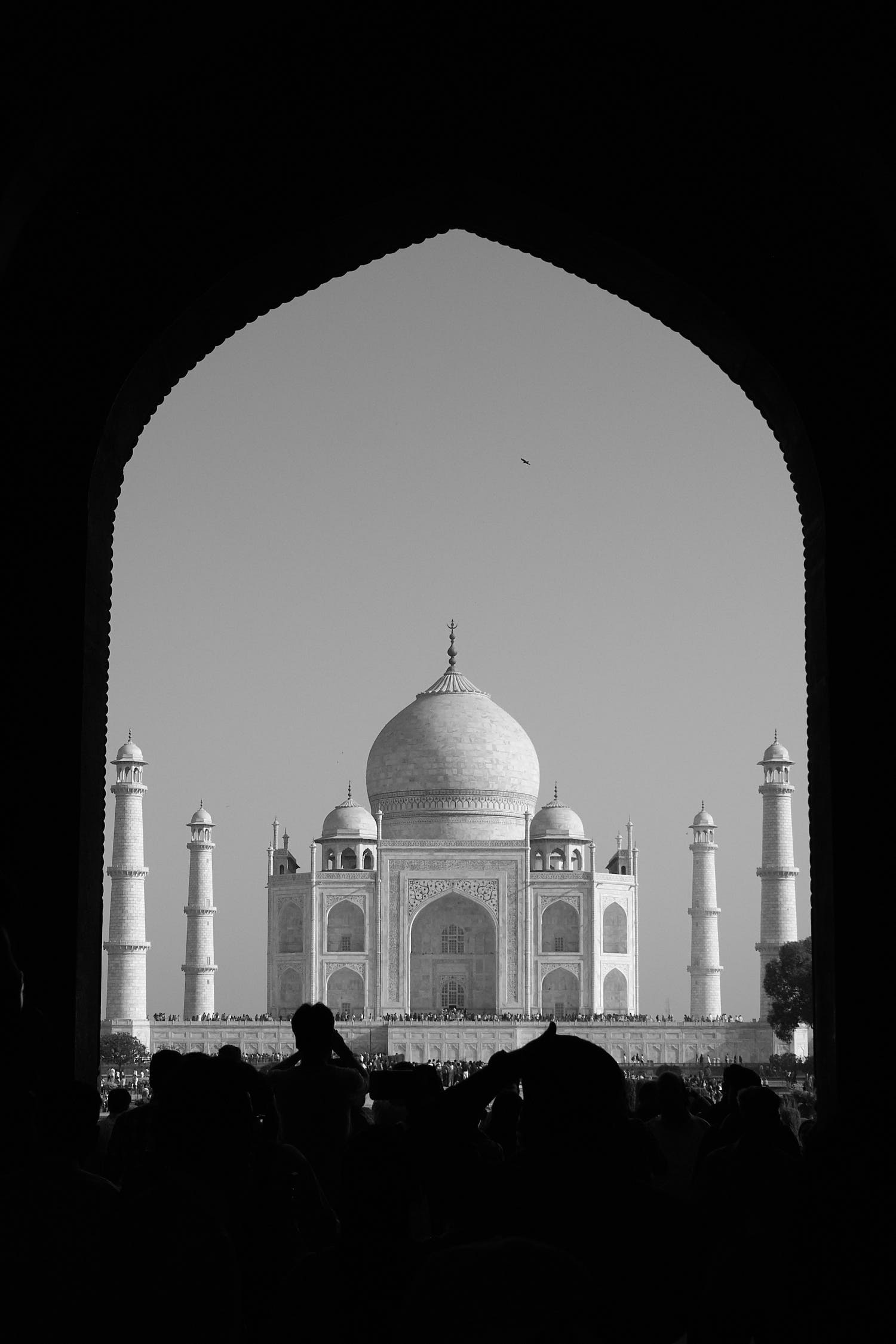 We bid farewell to this beautiful building and left in awe at the power of love, money, human ingenuity, and determination. We loved the Taj Mahal and felt it was much better in real life than in the pictures. I think the positive experience we had was primarily driven by the time of day that we experienced the Taj Mahal, at sunset from across the river, and sunrise within the complex itself. It truly felt like bucket-list stuff to see this building in real life!